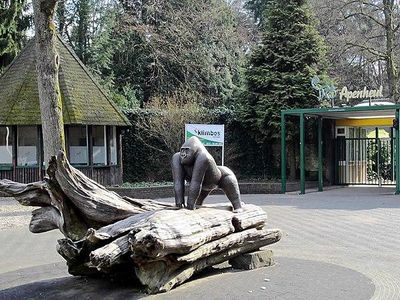 Apenheul Primate Park is a zoo in Apeldoorn, Netherlands. It specializes in apes and monkeys. It opened in 1971 and was the first zoo in the world where monkeys could walk around freely in the forest and between the visitors. It started with just a few species, now it displays more than 30 different primates, among them bonobo, gorilla and orangutan.
Apenheul Primate Park was conceptualised by photographer Wim Mager in the 1960s, when it was legal for private citizens to own monkeys. Mager, who himself had several monkeys as pets, believed both humans and primates would benefit from housing the animals in a more natural forest-like environment. He created the apen-heul .