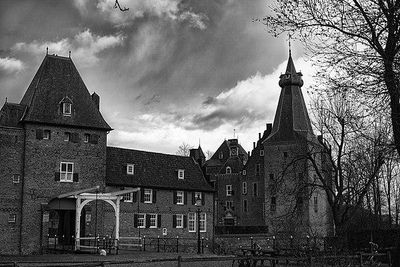 Doorwerth Castle is a medieval castle situated on the river Rhine near the city of Arnhem, Netherlands.
The original castle, probably wooden, is first mentioned in 1260 when it was besieged and burned to the ground, after which it was rebuilt in stone. In 1280 this second castle was again besieged and this time the bailey was burned down. This castle probably consisted of a simple hall-keep, two stories high with 1.20 meter thick walls, and featured a surrounding moat which was fed by the nearby river Rhine.