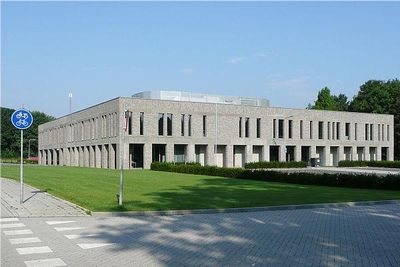 Stein , Limburgish: [ˈstɛin]) is a municipality and a town in the southeastern Netherlands. The municipality had a population of 24,961 in 2019 and covers an area of 22.80 km2 of which 1.72 km2 is water.The municipality of Stein makes part of the region of South Limburg and lies between the city of Geleen in the east and Beek in the southeast, and lies furthermore west of interchange Kerensheide and the chemical industries of Chemelot. To the west lies the Belgian border, across the Meuse river. In comparison to other cities and villages in the area, Stein is fairly big. It is also the capital city of the municipality with the same name. It has i.a. three Roman Catholic churches, an abandoned mediaeval castle, and a port to the Juliana Canal which used to be the second largest inland port in all of Europe.