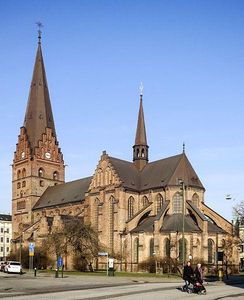 Saint Peter's Church is a Brick Gothic church in Malmö, Sweden. Built in the 14th century as the main church of the city, it has been described as "the main Gothic monument within church architecture in Skåne". The church was a spiritual centre during the Reformation, and was one of only a few churches in what was at the time medieval Denmark that suffered damage due to iconoclasm as a consequence of the Reformation. St. Peter's Church contains late medieval frescos of recognized high quality, as well as a number of unusual furnishings. The altarpiece, made in 1611, is one of the largest in the Nordic countries.

St. Peter's Church is the oldest church in Malmö, as well as the oldest preserved brick building, and originally the only parish church of the city. It is characteristic for the younger medieval cities of Skåne, such as Malmö, to only have one original parish church; nearby Lund, an older settlement, in contrast had a high concentration of churches early on. The explanation is probably that Malmö rose to significance at a time when the land was already subdivided into parishes following the Christianization of Scandinavia in the preceding centuries. Malmö began a rapid expansion thanks to the lucrative trade in herring around 1200 and the city was part of the economic infrastructure around the Hanseatic League and the Skåne Market. By the end of the Middle Ages the city had established itself as the most important commercial city in the province. St. Peter's Church has been described as "the main Gothic monument within church architecture in Skåne" and as a "very good and strongly authentic representative of Baltic Brick Gothic". During the 14th century, St. Peter's Church was the largest town church in Denmark. It is part of an urban structure with a still largely intact medieval street layout.