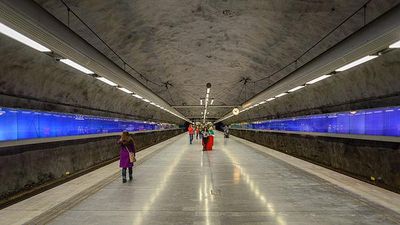 Bagarmossen metro station is on the green line of the Stockholm metro, located in Bagarmossen, Söderort in the south of Stockholm. The surface station was opened on 18 November 1958 as the southern terminus of the extension from Hammarbyhöjden. On 15 August 1994, the line was extended further to Skarpnäck.
The current station is 19 metres below ground level and was opened on 15 August 1994 as the extension to Skarpnäck was taken into service and Bagarmossen no longer served as a terminus. The old surface-level station with the same name was in use between 18 November 1958 and 8 July 1994. After the surface level station closed, a number of residential buildings were constructed on the site of the station and its approaches.