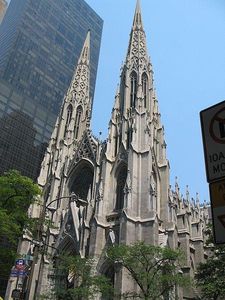 St. Patrick's Cathedral is a decorated neo-gothic Catholic cathedral on Manhattan in New York City, New York, United States, erected in 1879. A prominent landmark of New York City, it is the seat of the archbishop of the Roman Catholic Archdiocese of New York as well as a parish church, located on the east side of Fifth Avenue between 50th and 51st Streets in Midtown Manhattan, directly across the street from Rockefeller Center, facing the Atlas statue and the International Building. It is considered one of the most visible symbols of the Catholic Church in the United States.

The land on which the present cathedral stands was purchased in 1810. The Jesuit community built a college on the site, three miles north of the city. It contained a "fine old house" which was fitted with a chapel of St. Ignatius. The school closed in 1814 and the Jesuits sold the lot to the diocese. In 1813, the diocese gave use of the property to Dom Augustin LeStrange, abbot of a community of Trappists who came to America fleeing persecution by French authorities. In addition to a small monastic community, they also looked after some thirty-three orphans. With the downfall of Napoleon in that year, the Trappists returned to France in 1815, abandoning the property. The property at this point was designated for a future cemetery. The neighboring orphanage was maintained by the diocese into the late nineteenth century. Some of the Trappists resettled to Canada and eventually founded St. Joseph's Abbey in Spencer, Massachusetts.