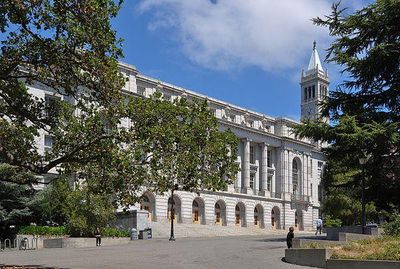 The University of California, Berkeley is a public research university in Berkeley, California. Founded in 1868, it is the flagship campus and the oldest of the ten campuses of the University of California.
Berkeley is one of the 14 founding members of the Association of American Universities and had $789 million in R&D expenditures in the fiscal year ending June 30, 2015. Today, Berkeley maintains close relationships with three United States Department of Energy National Laboratories—Lawrence Berkeley National Laboratory, Lawrence Livermore National Laboratory and Los Alamos National Laboratory—and is home to many institutes, including the Mathematical Sciences Research Institute and the Space Sciences Laboratory. Through its partner institution University of California, San Francisco , Berkeley also offers a joint medical program at the UCSF Medical Center.
As of October 2019, Berkeley alumni, faculty members and researchers include 107 Nobel laureates, the third most of any university worldwide, as well as 25 Turing Award winners, and 14 Fields Medalists. They have also won 19 Wolf Prizes, 45 MacArthur Fellowships, 20 Academy Awards, 19 Pulitzer Prizes, and 207 Olympic medals. In 1930, Ernest Lawrence invented the cyclotron at Berkeley, based on which UC Berkeley researchers along with Berkeley Lab have discovered or co-discovered 16 chemical elements – more than any other university. During the 1940s, Berkeley physicist J. R. Oppenheimer, the "Father of the Atomic Bomb", led the Manhattan project to create the first atomic bomb. In the 1960s, Berkeley was particularly noted for the Free Speech Movement as well as the anti–Vietnam War movement led by its students. In the 21st century, Berkeley has become one of the leading universities in producing entrepreneurs and its alumni have founded or co-founded many companies worldwide, including five classified as Fortune 500 Companies as of 2017.