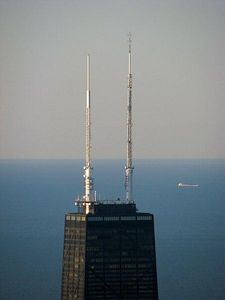 The John Hancock Center is a 100-story, 1,128-foot supertall skyscraper located in Chicago, Illinois. Located in the Magnificent Mile district, its name was changed to 875 North Michigan Avenue on February 12, 2018. Despite this, the building is still colloquially called the John Hancock Center.

It was constructed under the supervision of Skidmore, Owings and Merrill, with Peruvian-US chief designer Bruce Graham and Bangladeshi structural engineer Fazlur Rahman Khan. When the building topped out on May 6, 1968, it was the second-tallest building in the world, the tallest in Chicago, and the tallest outside New York City. It is currently the fifth-tallest building in Chicago and the thirteenth-tallest in the United States, behind the Aon Center in Chicago and ahead of the Comcast Technology Center in Philadelphia. When measured to the top of its antenna masts, it stands at 1,500 feet . The building is home to several offices and restaurants, as well as about 700 condominiums, and at the time of its completion contained the highest residence in the world. The building was named for John Hancock Mutual Life Insurance Company, a developer and original tenant of the building, which itself was named for the U.S. Founding Father John Hancock. In 2018, John Hancock Insurance requested that its name be removed and the owner is seeking another naming rights deal.