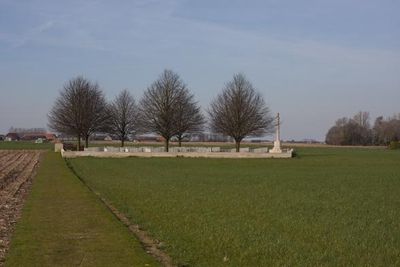 Bleuet Farm was an important link in the medical evacuation chain during the Third Battle of Ypres. It was at this spot that the walking wounded were brought together and given something to eat. Bleuet Farm was an Advanced Dressing Station, which was expected to move forward to Boezinge village. But this had still not happened by 1 August.
A cemetery was started here in June 1917 and continued in use until December of the same year. After the war, two burials from the surrounding battlefields were added and a single French grave removed.

Bleuet Farm Cemetery now contains 442 casualties from the First World War. The cemetery also contains the graves of three men who were executed during the war: Private T. Hawkins, Private A. Westwood and Private F.W. Slade.