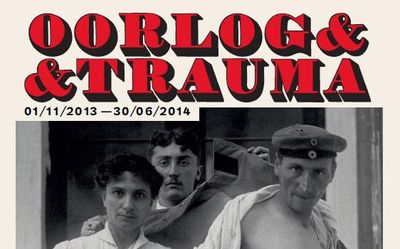 You’ve reached the end of this route. But maybe you would like to know more about the war and how casualties were treated. In the In Flanders Fields Museum in Ypres and in Ghent you can visit a dual exhibitions until june 20th 2014.
How were wounded soldiers nursed on the front in WWI? Who did it and how were they
evacuated? What happened to soldiers suffering shellshock? Were they cowards, male hysterics, or were they really traumatised? On the eve of the great remembrance of the
First World War, the dual exhibition War and Trauma demonstrates that - even a century later - attention should be focused on the fate of the people. The IFFM in Ypres examines the organisation of the general medical care on the front during the First World War with the exhibition Soldiers and Ambulances. The Dr. Guislain Museum in Ghent zooms in on various conflicts in the twentieth century, with the focus on a specific branch in medicine, psychiatry, with the Soldiers and Psychiatrists exhibition.