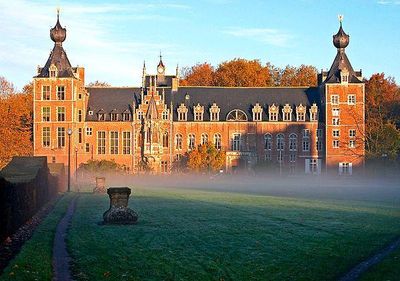 The site had been the castle of the lords of Heverlee since the 12th century, but this family became impoverished and had to sell the site in 1445 to the Croÿ family from Picardy. Antoine I de Croÿ demolished the medieval castle and started works to build the current château in 1455 on the site, of which he destroyed all but one tower. His grandson, William de Croÿ, completed the works on the château in 1515, and founded a monastery on the château grounds for the Benedictine Celestines. The architectural style is in large part traditionally Flemish, with sandstone window frames and brick walls, though it has been structurally altered since 1515 and has elements of Gothic, Renaissance, and Neo Gothic architecture. Its large corner towers are typical, once surmounted by a German eagle.

Charles III of Croy was the 4th and last duke, and after his death in 1612 without issue the château passed to the Arenberg family into which his sister had married, and remained in that family until the First World War.