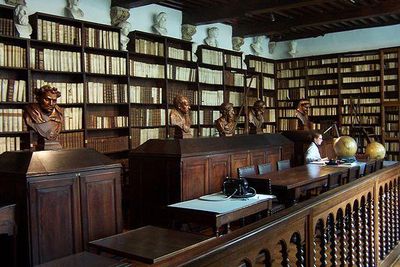 The Plantin-Moretus Museum is a printing museum in Antwerp, Belgium which focuses on the work of the 16th century printers Christophe Plantin and Jan Moretus. It is located in their former residence and printing establishment, the Plantin Press, at the Vrijdagmarkt in Antwerp and has been a UNESCO World Heritage Site since 2005.
The printing company was founded in the 16th century by Christophe Plantin, who obtained type from the leading typefounders of the day in Paris. Plantin was a major figure in contemporary printing with interests in humanism; his eight-volume, multi-language Plantin Polyglot Bible with Hebrew, Aramaic, Greek and Syriac texts was one of the most complex productions of the period. Plantin's is now suspected of being at least connected to members of heretical groups known as the Familists, and this may have led him to spend time in exile in his native France.