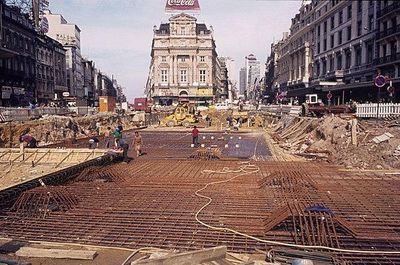 The Place de Brouckère or De Brouckèreplein is a major square in central Brussels, Belgium. It was created following the covering of the river Senne , replacing the Temple of the Augustinians, which was demolished in 1893. It is named in honour of Charles de Brouckère, a former mayor of the City of Brussels and professor at the Free University of Brussels, who played a great political role during the Belgian Revolution of 1830. The square measures approximately 50 by 350 metres and is nearly entirely paved.