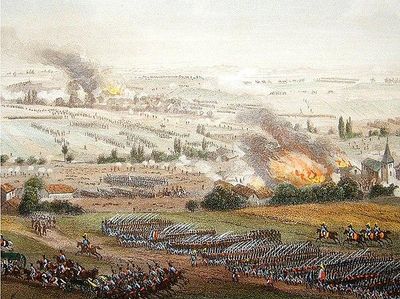 The Battle of Ligny was the last victory in the military career of Napoleon I. In this battle, French troops of the Armée du Nord under Napoleon's command defeated part of a Prussian army under Field Marshal Blücher, near Ligny in present-day Belgium. This battle, while a tactical victory, was a strategic loss in that the bulk of the Prussian army survived the battle and played a pivotal role two days later at the Battle of Waterloo, having been reinforced by the Prussian IV corps that had not participated in the battle at Ligny. Had the French army succeeded in keeping the Prussian army from joining the Anglo-allied Army under Wellington at Waterloo, Napoleon might have won the Waterloo Campaign.

On 13 March 1815, six days before Napoleon reached Paris, the powers at the Congress of Vienna declared him an outlaw; four days later, the United Kingdom, Russia, Austria, and Prussia bound themselves to put 150,000 men each into the field to end his rule. Napoleon knew that once his attempts at dissuading one or more of the Seventh Coalition Allies from invading France had failed, his only chance of remaining in power was to attack before the Coalition could put together an overwhelming force. If he could destroy the existing Coalition forces south of Brussels before they were reinforced, he might be able to drive the British back to the sea and knock the Prussians out of the war.
The Duke of Wellington expected Napoleon to try to envelop the Coalition armies, a maneuver that he had successfully used many times before, by moving through Mons to the south-west of Brussels. The roads to Mons were paved, which would have enabled a rapid flank march. This would have cut Wellington's communications with his base at Ostend, but would also have pushed his army closer to Blücher's. In fact, Napoleon planned instead to divide the two Coalition armies and defeat them separately, and he encouraged Wellington's misapprehension with false intelligence. Moving up to the frontier without alerting the Coalition, Napoleon divided his army into a left-wing, commanded by Marshal Ney, a right-wing commanded by Marshal Grouchy, and a reserve, which he commanded personally . Crossing the frontier at Thuin near Charleroi before dawn on 15 June, the French rapidly overran Coalition outposts and secured Napoleon's favored "central position" – at the junction between the area where Wellington's allied army was dispersed to his north-west, and Blücher's Prussian army to the north-east.