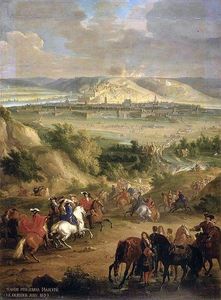 The Siege of Namur, 25 May–30 June 1692, was a major engagement of the Nine Years' War, and was part of the French grand plan to defeat the forces of the Grand Alliance and bring a swift conclusion to the war. Namur, sitting on the confluence of the Meuse and Sambre rivers, was a considerable fortress, and was a significant political and military asset. French forces, guided by Vauban, forced the town's surrender on 5 June, but the citadel, staunchly defended by Menno van Coehoorn, managed to hold on until 30 June before capitulating, bringing an end to the 36-day siege. Concerned that King William III planned to recapture the stronghold, King Louis XIV subsequently ordered his commander-in-chief, the duc de Luxembourg, to join battle with the Allies in the field, resulting in the bloody Battle of Steenkerque on 3 August.
As in 1691, five large armies were created for the five major fronts of the war: Flanders, the Moselle, the Rhine, Piedmont, and Roussillon. To these was added a further force in Flanders to attack what was to be France’s major goal for 1692, the important Sambre–Meuse fortress of Namur. The capture of the fortress would not only give control of the vicinity to France, but it might also inspire the Dutch to make peace; if its capture did not lead to immediate talks, it would nevertheless be an important pawn at any future negotiations.