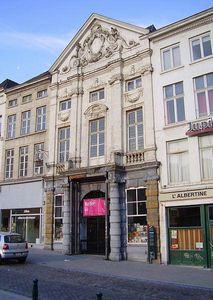 The Bortier Gallery is a shopping arcade designed by Jean-Pierre Cluysenaer. It was constructed in 1847 and opened in the following year. It is situated in the centre of the City of Brussels between the Mont des Arts/Kunstberg and the Grand Place/Grote Markt, not far from the more monumental Royal Saint-Hubert Galleries. This site is served by Brussels Central Station on lines 1 and 5 of the Brussels metro).

Originally, the mall was a part of the Marché de la Madeleine/Magdalenamarkt complex, a covered market also built by Cluysenaer. The facade on Rue de la Madeleine in a Flemish baroque style antedates the construction of the mall behind it. This front was recuperated from an old town house built on that site in the 18th-century. Today, the mall mostly houses bookshops and art galleries.