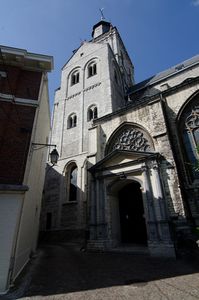 Tienen used to be called the white town because of its whitewashed facades and now this name is justified even more because of its numerous white towers. From afar one sees four: from west to east there is the new water tower, the churches of Notre Dame and Saint Germain and the cooling towers of the sugar refinery .Of these towers the oldest is that of the Romanesque Saint Germain.
The church was built between the 13th and 16th centuries and replaced a roman basilica with four towers of which the western part (the westbouw) has been preserved. In the mid 16th century the "westbouw" was raised and given a central tower. This was completed with a baroque spire in 1713.The nave and chancel are gothic and UNESCO has recognised the tower as a world heritage site. The 65 m belfry and its carillon with 54 bells are sometimes accessible to the public. The church has the oldest organ in the country.