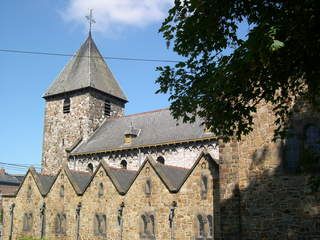 The church of Saint Peter (Andenelle)

The church with its tower dates from the 12th century. Built of reddish sandstone, this remarkable monument of Mosan architecture is one of the oldest in the region. It underwent alterations in the 17th century (the inside pillars were changed), in 1853 (the entrance portal, which used to be found in the north, was moved to the west), in 1860 (building of the transept), in 1875 (the portal was moved to the north as a result of the building of the Andenne-Haillot road) and in 1923 (building of the side aisles). It is a mistake to believe that it was built in a hollow. In times past, it was level with the road and the square. People entered on a level, through a big door at the foot of the tower, next to the stream. But when the Haillot bottom road was built, the portion of the road was raised and people had to go down a few steps to enter the church.