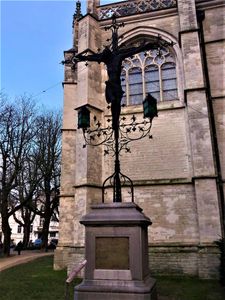 This Peasants' War Memorial (1798) stands on the site of the old cemetery , consisting of a wrought-iron cross and a large cast-iron Christ.

Erected and dedicated by the Davidsfonds on October 23, 1898 , this memorial commemorates the 41 insurgents shot by French soldiers a century earlier during the 1798 “Peasants' War”.
His mass grave was discovered in 2010 during archaeological excavations at the Saint-Rombout cemetery.

This is the cross of the Sint-Nicolaaskerk in Dessel (province of Antwerp). On the hard stone base are several inscriptions and a copper plate.

The Boeren Krijg was a 1798 peasant uprising in South Holland against French occupation . The local (rural) population of various parts of modern-day Flanders rebelled mainly due to, among other things, strict military rule , additional taxes and confiscations, anti-Catholic policies , the introduction of military service and the subordination of their . language in favor of French. Another reason given is the nationalization and privatization of agricultural land.

The first skirmishes had already begun in the East Flemish town of Overmere on October 12, 1798. Four times, between October 5 and 19, it was announced in front of the Mechelen town hall that many young people would be conscripted into the French army . For many, this was the proverbial straw that forced people to actually protest.

Only twenty or so French soldiers remained in the city and the gates remained open. Since the city was thus in possession , the peasant warriors (also called bandits ) could easily take Mechelen on October 22nd . The bandits' attack was quite spontaneous, with no real coordinated leadership . The same day, the French led by Béguinot were able to return to the city with their relatively small troops.

Another attack by peasant warriors arrived on October 23 . Mechelen was almost completely surrounded this time and Béguinot was unable to defeat the robbers. Two captains, Mazingant and Conroux, came from Boom with their troops . For example, the French had a total of about 550 men , which was too large a force for the raiders. With this increased strength, the bandits could be defeated this time.

A "court-martial" was quickly set up and of the 70 prisoners, 41 were found guilty of "treason against the French Republic". They were shot near Sint-Romboutskerkhof and, if not killed immediately, bayoneted. Then they were thrown into a mass grave , some not quite dead. It was intended to serve as a signal to other insurgents in the region.