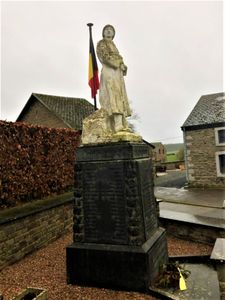 The monument is made of stone, is 3.7 meters high and was made by the Jos company. VERBEKE from Bruges (inscription at the bottom of the image) but designed by Eudore HAULT (La Roche artist). The construction of this monument was decided in November 1919. The memorial was completed after World War II and recently renovated.

A soldier, rifle on the ground, appears to be scanning the horizon, ready to pick up his weapons if need be, as the text below reads: "Still look."

It commemorates the victims of the First World War : soldiers, deportees, resistance fighters and prisoners.

Beausaint had to accommodate four to five thousand soldiers on August 11 and 12, 1914 . They beat several people into the well for lack of water .