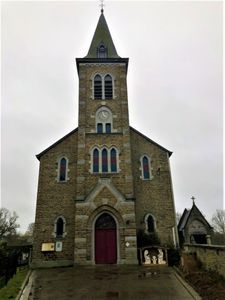 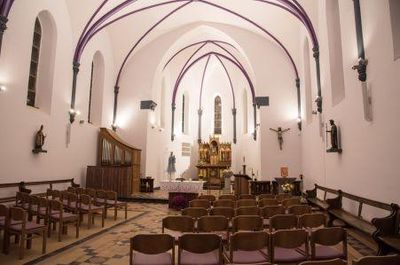 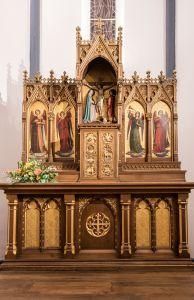 This neo-Gothic style church of mud rubble and limestone was built in 1891 (dated) to plans by the architect Verhas.
The interior was restored by LM Londot in 1975.

Inside , the benches in the nave date from the 18th century.
To the right of the presbytery is a wooden Christ painted on the cross with expressive sorrows , the work of a well-known 16th-century sculptor from the region, the Master of Waha. Also worth seeing is the altarpiece on the high altar, which depicts the passion of Jesus and the singing angels.

More modern are the stained glass windows depicting the saints venerated in the region, the organ and the small altar to the right of the choir.

On the way out, look at the large stone that now serves as the threshold : it is a very old tombstone of the Coppin family, former lords of the town. Only four shields are visible on the surface.