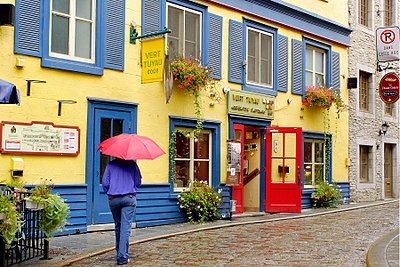 Quebec City or ; French: Québec [kebɛk] ); French: Ville de Québec), officially Québec, is the capital city of the Canadian province of Quebec. The city had a population estimate of 531,902 on July 2016, and the metropolitan area had a population of 800,296 on July 2016, making it Canada's seventh-largest metropolitan area and Quebec's second-largest city after Montreal.
The narrowing of the Saint Lawrence River proximate to the city's promontory, Cap-Diamant , and Lévis, on the opposite bank, provided the name given to the city, Kébec, an Algonquin word meaning "where the river narrows". Founded in 1608 by Samuel de Champlain, Quebec City is one of the oldest cities in North America. The ramparts surrounding Old Quebec are the only fortified city walls remaining in the Americas north of Mexico, and were declared a World Heritage Site by UNESCO in 1985 as the 'Historic District of Old Québec'.