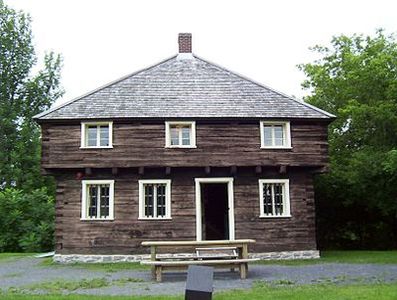 The Battle of Lacolle River was fought on November 20, 1812, during the War of 1812. In this relatively short and fast battle, a very small garrison of Canadian militia, with the assistance of Kahnawake Mohawk warriors, defended a makeshift log guardhouse on the Montreal road at the bridge over the Lacolle River .
The American invasion force, prepared and led by Major General Henry Dearborn, captured the blockhouse in the early morning, possibly following a brief confrontation with the outnumbered defending forces. In the dark, a second group of American militia attacked the troops at the guardhouse, resulting in a short battle between two groups of American forces. In the aftermath of this confusion, the Canadian forces under the command of Charles de Salaberry launched a counterattack against the shaken American forces, forcing a retreat to Champlain before the American forces withdrew from Lower Canada completely. After this defeat, the demoralized American forces would not attempt this assault again until 1814 in the Battle of Lacolle Mills .