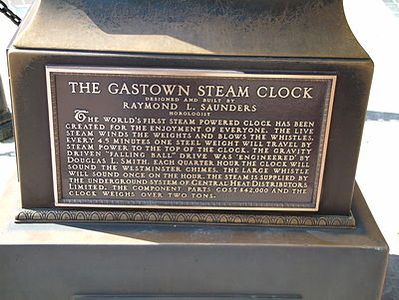 A steam clock is a clock which is fully or partially powered by a steam engine. Only a few functioning steam clocks exist, most designed and built by Canadian horologist Raymond Saunders for display in urban public spaces. Steam clocks built by Saunders are located in Otaru, Japan; Indianapolis, United States; and the Canadian cities of Vancouver, Whistler and Port Coquitlam, all in British Columbia. Steam clocks by other makers are installed in St Helier, Jersey and at the Chelsea Farmers' Market in London, England.
Although they are often styled to appear as 19th-century antiques, steam clocks are a more recent phenomenon inspired by the Gastown steam clock built by Saunders in 1977. One exception is the steam clock built in the 19th century by Birmingham engineer John Inshaw to demonstrate the versatility of steam power.