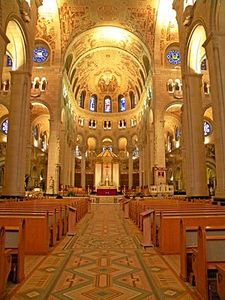 The Basilica of Sainte-Anne-de-Beaupré is a basilica set along the Saint Lawrence River in Quebec, Canada, 30 kilometres east of Quebec City. It has been credited by the Catholic Church with many miracles of curing the sick and disabled. It is an important Catholic sanctuary, which receives about a half-million pilgrims each year. Since 1933 they have included members of the Anna Fusco Pilgrimage from Connecticut, United States of America. The peak period of pilgrimage is around July 26, the feast of Saint Anne, the patron saint of Quebec.
St. Anne is believed, by the pious, to obtain miracles through her intercession. People from all around the world come to visit the basilica. Pillars in the front entrance are covered in crutches from people who are said by the parishioners to have been miraculously cured and saved.