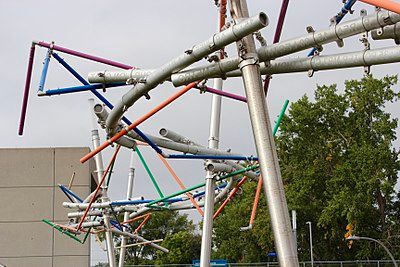 De la Concorde station is an intermodal transit station in Laval, Quebec, Canada. It serves the Montreal Metro's Orange Line and connects to the Réseau de transport métropolitain 's Saint-Jérôme commuter rail line. It is located in the Laval-des-Rapides district and opened April 28, 2007, as part of Montreal Metro's extension into Laval.
The station is named after boulevard de la Concorde, which in turn is named for the Place de la Concorde in Paris. The entrance building is split-level, the lower providing access to the Metro station and the upper level to the train station, with the platforms continuing towards the walkway that goes under the rail bridge that crosses Boul. de la Concorde. This walkway is higher than the sidewalk. On the west side of the station, opposite the Metro station, stairs connect the sidewalk with the walkway.