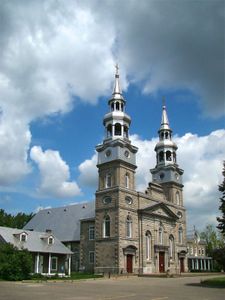 Ahuntsic-Cartierville is a borough of the city of Montreal, Quebec, Canada. The borough was created following the 2002 municipal reorganization of Montreal. It comprises two main neighbourhoods, Ahuntsic, a former village annexed to Montreal in 1910 and Cartierville, a town annexed to Montreal in 1916.
Ahuntsic-Cartierville is located in the north end of Montreal, on the banks of the Rivière des Prairies. It traces its history to the fortified Sault-au-Récollet settlement, which was established by the Sulpicians in 1696. This in turn led to the colonization of the area.