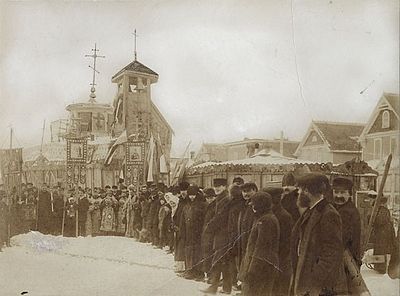 The Tin Can Cathedral was the first independent Ukrainian church in North America. It was the heart of the Seraphimite Church. Founded in Winnipeg, it had no affiliation with any church in Europe.
Ukrainian immigrants began arriving in Canada in 1891 mainly from the Austro-Hungarian provinces, the regions of Bukovina and Galicia. The new arrivals from Bukovina were Eastern Orthodox, those from Galicia Eastern Catholic. In either case it was the Byzantine Rite with which they were familiar. By 1903 the Ukrainian immigrant population in Western Canada had become large enough to attract the attention of religious leaders, politicians, and educationalists.