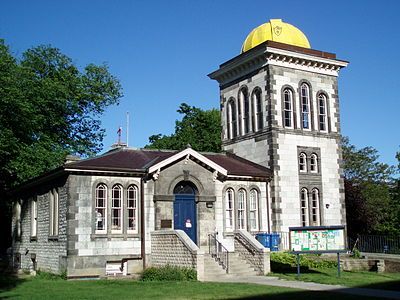 The Toronto Magnetic and Meteorological Observatory is a historical observatory located on the grounds of the University of Toronto, in Toronto, Ontario, Canada. The original building was constructed in 1840 as part of a worldwide research project run by Edward Sabine to determine the cause of fluctuations in magnetic declination. Measurements from the Toronto site demonstrated that sunspots were responsible for this effect on Earth's magnetic field. When this project concluded in 1853, the observatory was greatly expanded by the Canadian government and served as the country's primary meteorological station and official timekeeper for over fifty years. The observatory is considered the birthplace of Canadian astronomy.
Compasses tended to "wander" from north when measurements were taken at different locations or even at a single location over a period of time. The astronomer Edmund Halley noted this and the problems it would cause for navigation in 1701. It was also believed that whatever was causing this effect might be causing changes in the weather, and that studying magnetic variations might lead to better weather prediction.