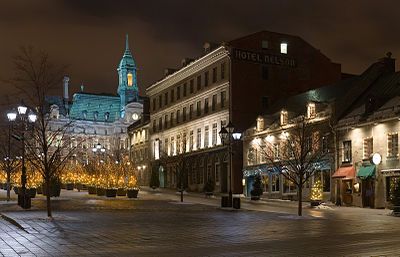 Place Jacques-Cartier is a square located in Old Montreal, Quebec, Canada. It is an entrance to the Old Port of Montreal.
In 1723, the Château Vaudreuil was built for Philippe de Rigaud, Marquis de Vaudreuil - its formal gardens occupying the space that is now the square. The Chateau burned down in 1803 and it was suggested by The Hon. Jean-Baptiste Durocher and The Hon. Joseph Périnault that the space be transformed into a public square, known as New Market Place. In 1809, Montreal's oldest public monument was raised there, Nelson's Column. In 1847, the square was renamed in honour of Jacques Cartier, the explorer who claimed Canada for France in 1535.