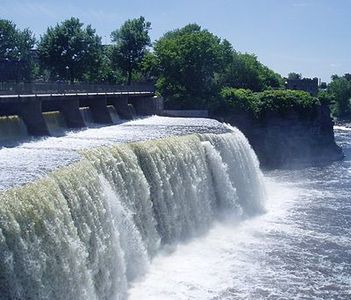 The Rideau Falls are two waterfalls located in Ottawa, Ontario, Canada where the Rideau River empties into the Ottawa River. The falls are divided by Green Island, with the Old City Hall just to the south. To the west of the falls is the headquarters of the National Research Council while to the east are the Canada and the World Pavilion and the French Embassy. The falls were named by the early French for their resemblance to a curtain, or rideau in French. The Rideau River was later named after the falls. The Rideau Canal was constructed to bypass these falls and the Hog's Back Falls.