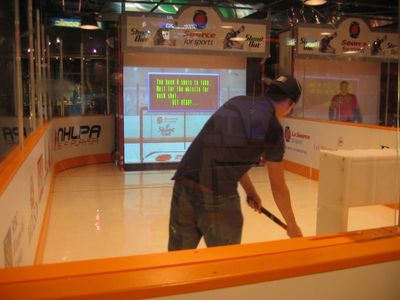 The Hockey Hall of Fame is located in Toronto, Ontario, Canada. Dedicated to the history of ice hockey, it is both a museum and a hall of fame. It holds exhibits about players, teams, National Hockey League (NHL) records, memorabilia and NHL trophies, including the Stanley Cup. Originally founded in Kingston, Ontario, the Hockey Hall of Fame was first established in 1943 under the leadership of James T. Sutherland. The first class of honoured members was inducted in 1945, before the Hall of Fame had a permanent location. It moved to Toronto in 1958 after the NHL withdrew its support for the International Hockey Hall of Fame in Kingston, Ontario. Its first permanent building opened at Exhibition Place in 1961. In 1993, the Hall was relocated to a former Bank of Montreal building in Downtown Toronto, where it is now located.