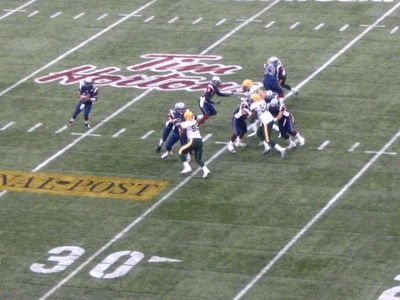 The Canadian Football League (CFL) (Ligue canadienne de football (LCF) in French) is a professional sports league in Canada. The CFL is the highest level of competition in Canadian football, a form of gridiron football closely related to American football. Its nine current teams, which are located in nine separate cities, are divided into two divisions: the East Division, with four teams, and the West Division with five teams. As of 2014, the league will feature a 19-week regular season, which traditionally runs from late June to early November; each team plays 18 games with at least two bye weeks. Following the regular season, six teams compete in the league's three-week divisional playoffs, which culminate in the late-November Grey Cup championship, the country's largest annual sports and television event.