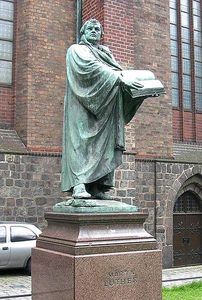 St. Mary's Church, known in German as the Marienkirche, is a church in Berlin, Germany. It is located on Karl-Liebknecht-Straße in central Berlin, near Alexanderplatz. The exact age of the original church site and structure is not precisely known, but it was mentioned as the site of the alleged theft by Jews of the wafers in an act of Host Desecration in 1243. As a result of these charges, a number of Jews were burnt at the stake at a place later called Judenberg. It is also mentioned in German chronicles in 1292. It is presumed to date from earlier in the 13th century.

The architecture of the building is now largely composed of comparatively modern restoration work which took place in the late 19th century and in the post-war period. The church was originally a Roman Catholic church, but has been a Lutheran Protestant church since the Reformation in 1539. While keeping this confession the parish was part of the Prussian Union of churches from 1817 to 1948, an umbrella church body combining parishes maintaining mostly the Lutheran, but also some the Calvinist and few the United Protestant confession.