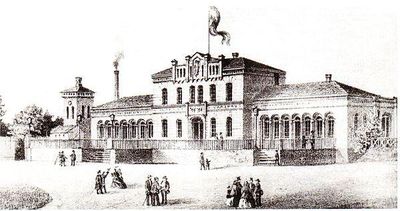 Schwerin is the capital and second-largest city of the northeastern German state of Mecklenburg-Vorpommern. It has a population of about 100,000.
Schwerin was first mentioned in 1018 as Wendenburg and was granted city rights in 1160 by Henry the Lion, thus it is the oldest city of Mecklenburg-Vorpommern. It is globally known for its romantic Schwerin Palace, situated on an island in Lake Schwerin. The palace was one of the main residences of the dukes and grand dukes of Mecklenburg until 1918 and is the official seat of the state parliament since 1990. The city also has a largely intact old town, thanks to only minor damage in World War II.