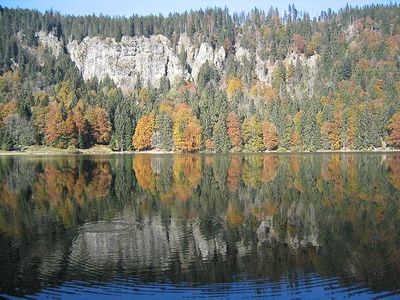 The Feldsee is a lake in southern Baden-Württemberg at the foot of the Feldberg east of Freiburg im Breisgau in Germany. It is part of the Southern Black Forest Nature Park.
The Feldsee is a tarn, around 97,500 m2 in area and up to 32 metres deep. It was formed by glaciers of the last Ice Age. The largest tarn in the Black Forest, it is hemmed in on three sides by steep mountainsides up to 300 metres high. It is almost circular and has a diameter of between 350 and 370 metres. This area of highland at a height of 1,100 m, which is open to the northeast, enabled it to amass and retain the huge quantities of snow that were the cause of this armchair-shaped terrain with its steep back face, level floor and embankment of moraine at the front. The lake formed after the melting of the ice sheet behind the lines of heaped-up glacial debris. The Seebach stream, which rises between the Feldberg and Seebuck in the Grüble, flows through the Feldsee, tumbling over the Feldsee Waterfall on the wall of the cirque, eventually becoming the Gutach at the far side of the Titisee. For several hundred thousand years this was the upper course of the ancient Danube , which flowed into the present-day Danube near Immendingen and, for the last several ten thousand years has formed a headstream of the Wutach, which flows into the Rhine.