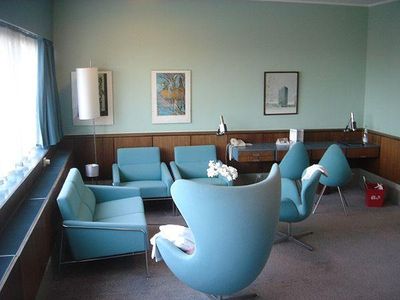 The hotel was designed by Danish architect and designer Arne Jacobsen for the airline Scandinavian Airlines System . It was opened on July 1, 1960 by King Frederick IX and Queen Ingrid as the Royal Hotel. It was also known as the SAS Royal Hotel. The hotel was renamed the Radisson SAS Royal Hotel in 1994, when SAS signed a joint marketing agreement with Radisson Hotels. When SAS and Radisson ceased the marketing agreement in February 2009, the hotel remained with Radisson and was renamed the Radisson Blu Royal Hotel. On March 6, 2018 it was renamed Radisson Collection Hotel, Royal Copenhagen.
At its completion the hotel was the largest in Denmark. At 69.60 meters in height, it was the first skyscraper in Copenhagen, and until 1969, the tallest high-rise building in Denmark. In 2009, it was the country's seventh-highest tower.