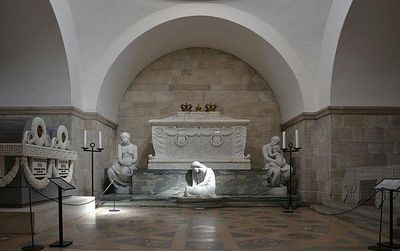 Roskilde Cathedral , in the city of Roskilde on the island of Zealand in eastern Denmark, is a cathedral of the Lutheran Church of Denmark.

The cathedral is the most important church in Denmark, the official royal burial church of the Danish monarchs, and a UNESCO World Heritage Site. This is due to two criteria: the architecture of the cathedral shows 800 years of European architectural styles, and it is one of the earliest examples in Scandinavia of a Gothic cathedral to be built in brick, it encouraged the spread of the Brick Gothic style throughout Northern Europe. Constructed during the 12th and 13th centuries, the cathedral incorporates both Gothic and Romanesque architectural features in its design. The cathedral has been the main burial site for Danish monarchs since the 15th century. As such, it has been significantly extended and altered over the centuries to accommodate a considerable number of burial chapels and the many added chapels show different architectural styles.