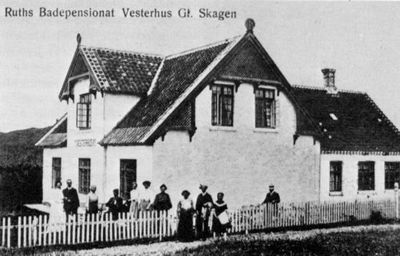 Ruth's Hotel is a historic hotel in the Højen district of Skagen in the far north of Jutland, Denmark. Named after its founders, Emma and Hans Christian Ruth, who opened it as Badepensionat Vesterhus in 1904, the establishment has now gained a reputation not only for comfort but for its French restaurant run by Michel Michaud, said to be Skagen's best. Ruth's Hotel also contains a wellness center.
In 1891, Hans Christian Ruth built a house in Højen . An extension was added on the east side in 1909 with 12 rooms to be used as guest-house accommodation. A further enlargement followed in 1912 with 18 bedrooms and in 1928 an additional floor was added to house bedrooms. In an attempt to attract painters, a further extension was completed with rooms and a studio. Major alterations to the central section were completed in 1919 with a concert room, a dining room and a pantry.