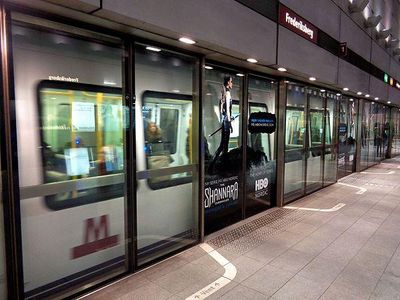 Frederiksberg Station is a rapid transit station opened in 2003 on the Copenhagen Metro in Frederiksberg, Denmark. It serves the M1 and M2 lines and connects with bus services. It is located in fare zones 1 and 2. Once completed in 2017, the station will also serve M3—the City Circle Line—providing an interchange between it and the existing Metro lines.

Frederiksberg station opened on 17 October 1864 as an intermediate station on the main line between Copenhagen and Roskilde when the inner portion of that line was relocated from Copenhagen's first station to the second central station at present-day Kampmannsgade, which also served North Line. West of Frederiksberg the line ran southwest to Vigerslev from which it followed the current alignment towards Roskilde.