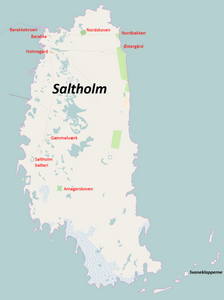 Saltholm is a Danish island in the Øresund, the strait that separates Denmark and Sweden. It is located to the east of the Danish island of Amager in Tårnby municipality and lies just to the west of the sea border between Denmark and Sweden. It is 7 km long and 3 km wide, covering an area of 16 km2, making it Denmark's 21st largest island. Saltholm is very flat; its highest point stands only 2 m above sea level, rendering it vulnerable to flooding if persistent east winds cause a tidal surge in the Baltic Sea. It is a relatively new landmass in geological terms, having risen from the sea about 4,000 years ago due to post-glacial rebound, and is surrounded by a large area of shallow water that covers an area of 28 km2 . A series of islets, inlets and rock deposits from the last ice age appear at the south end of the island.
Its neighboring island to the south is the artificial island Peberholm , which is a part of the Øresund Bridge and was named to complement Saltholm.