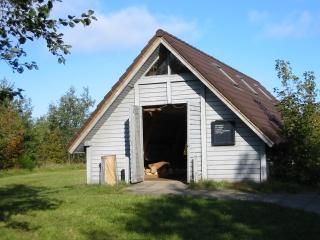 The Egtved Girl [ˈɛɡtvɛð] was a Nordic Bronze Age girl whose well-preserved remains were discovered outside Egtved, Denmark in 1921. Aged 16–18 at death, she was slim, 160 cm tall , had short, blond hair and well-trimmed nails. Her burial has been dated by dendrochronology to 1370 BC. She was discovered together with cremated remains of a child in a barrow approximately 30 metres wide and 4 metres high. Only the girl's hair, brain, teeth, nails and a little of her skin remain preserved.
The barrow was excavated in 1921, and an east-western aligned coffin was found. It was transported in sealed condition to the National Museum of Denmark in Copenhagen, where it was opened and the Egtved Girl discovered.