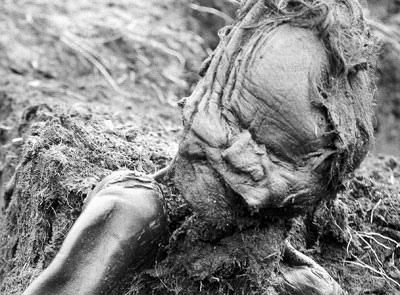 The Grauballe Man is a bog body that was uncovered in 1952 from a peat bog near the village of Grauballe in Jutland, Denmark. The body is that of a man dating from the late 3rd century BC, during the early Germanic Iron Age. Based on the evidence of his wounds, he was most likely killed by having his throat slit. His corpse was then deposited in the bog, where his body was naturally preserved for over two millennia. He was not the only bog body to be found in the peat bogs of Jutland: with other notable examples Tollund Man and the Elling Woman, Grauballe Man represents an established tradition at the time; it is commonly thought that these killings, including that of Grauballe Man, were examples of human sacrifice, possibly an important rite in Iron Age Germanic paganism.

Grauballe Man has been described as "one of the most spectacular discoveries from Denmark's prehistory" because it is one of the most exceptionally preserved bog bodies in the world. Upon excavation in 1952, it was moved to the Prehistoric Museum in Aarhus, where it underwent research and conservation. In 1955 the body went on display at the Moesgaard Museum near Aarhus, where it can still be seen today. Due to the preservation of the man's feet and hands, his fingerprints were successfully taken.