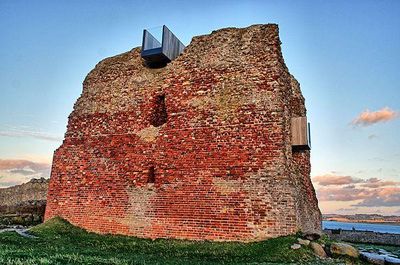 Kalø Castle is a ruined castle located in eastern Jutland, in Denmark, 20 km from the city of Aarhus within Mols Bjerge National Park.

The castle was founded in 1313 by the Danish king Erik Menved . It was one of at least four similar strongholds in Jutland, constructed to counter the ongoing rebellions of the Jutlandic nobility and peasantry against the Crown. The other strongholds were Borgvold in Viborg, Bygholm in Horsens and Ulstrup, east of Struer. All were built by local peasants forced labour, with the goal of breaking their rebellious spirits. Kalø Slot was raised on the small island of Kalø, connected to the mainland by a 500 m long artificial embankment, rising 1,2 m above sea level. The embankment was cobbled; deep moats were dug and earth mounds heaped around the fortress. A port of call, outer ringwalls and other fortifications were all built by hand. This was a colossal task in the early 14th century.