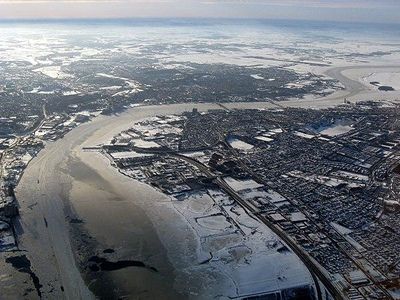 The Limfjord is a shallow part of the sea, located in Denmark where it is regarded as a fjord ever since the Vikings. However it has inlets both from the North Sea and Kattegat and hence separates the island of North Jutlandic Island from the rest of the Jutland Peninsula. It extends from Thyborøn Channel on the North Sea to Hals on the Kattegat. It is approximately 180 kilometres long and of an irregular shape with numerous bays, narrowings, and islands, most notably Mors, and the smaller ones Fur, Venø, Jegindø, Egholm and Livø. It is deepest at Hvalpsund .

Its main port is Aalborg, where a railway bridge and road bridge are built across Limfjorden to Nørresundby, while motorway E45 passes it through a tunnel to the east. Commercial ports also exist at Thisted, Nykøbing Mors, Skive, Løgstør, Struer, Lemvig and Thyborøn. There are also bridges at Oddesund, Sallingsund, Vilsund, Aggersund and Sebbersund, and a number of ferry crossings.