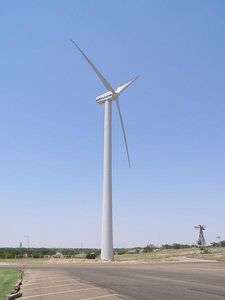 Vestas Wind Systems A/S is a Danish manufacturer, seller, installer, and servicer of wind turbines that was founded in 1945. The company operates manufacturing plants in Denmark, Germany, The Netherlands, Taiwan, India, Italy, Romania, The United Kingdom, Spain, Sweden, Norway, Australia, China, Brazil, Poland and the United States, and employs more than 25,000 people globally.
As of 2019 Vestas has installed over 66,000 wind turbines for a capacity of 100 GW in over 80 countries on five continents. As of 9 January 2019 the company has built production facilities in more than 12 countries, among them China, Spain and the United States. Vestas employs 25,000 people.