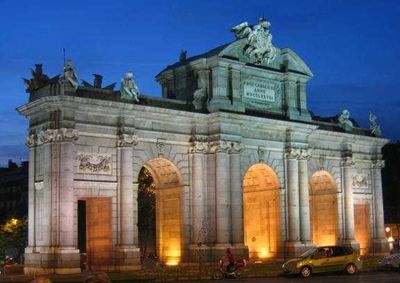 The Puerta de Alcalß ("Alcalß Gate") is a monument in the Plaza de la Independencia ("Independence Square") in Madrid, Spain, very close to the city centre and several meters away from the main entrance to the Parque del Buen Retiro. The square is bisected by Alcalß street, although the street itself doesn't cross through the monument, and it is the origin of the Alfonso XII, Serrano and Ol¾zaga streets. Its name originates from the old path from Madrid to the nearby town of Alcalß de Henares.

It was built by order of king Carlos III as a monumental gate in the city wall to pass the road which leads to the city of Alcalß, replacing an older, smaller, gate which stood nearby. It was inaugurated in 1778. Many songs have been created for this monument, and a very good one that came in the 1991 by Ana Belen and Victor manuel - La Pueta de Alcala (a spanish song)
(Source: Wikipedia)