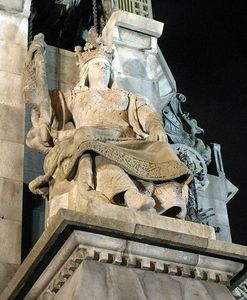 The Columbus Monument is a 60 m tall monument to Christopher Columbus at the lower end of La Rambla, Barcelona, Catalonia, Spain. It was constructed for the Exposición Universal de Barcelona in honor of Columbus' first voyage to the Americas. The monument serves as a reminder that Christopher Columbus reported to Queen Isabella I and King Ferdinand V in Barcelona after his first trip to the new continent.
At the very top of the monument stands a 7.2 m tall bronze statue atop a 40 m tall Corinthian column. The statue was sculpted by Rafael Atché and is said to depict Columbus pointing towards the New World with his right hand, while holding a scroll in the left. It is a commonly held belief that instead of pointing to the west towards the New World, the statue points east towards Columbus's supposed home city of Genoa. This, however, is not true, as the statue points south-southeast and in effect is pointing at a point somewhere near the city of Constantine, Algeria. To point at Genoa in northern Italy the statue would have to face east-northeast and point up the coastline. It is more likely that the statue is situated in the current way simply to have Columbus point out to sea underscoring his achievements in naval exploration. The statue is atop a socle, on which the word "Tierra" is inscribed.