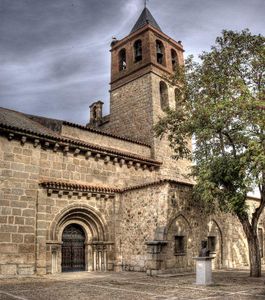 The martyrial basilica of Santa Eulalia de Mérida is a religious building that is located in the city of Mérida (Spain). It could be considered a very important nucleus of the birth of Christianity in the peninsula.

According to the researchers, it was the first Christian temple erected in Hispania after the Peace of Emperor Constantine; this church was therefore built as a martyrial basilica in memory of Eulalia de Mérida; for that reason it became, during the dawn of the Average Age, in place of peregrinations that arrived from the European West and from the North of Africa; at the same time the news of the martyrdom of its owner was spread throughout the Roman Empire and with its relics numerous churches were erected, especially in Western Europe.

Next to the church Saint James is depicted as a pilgrim, wich makes this church interesting for pilgrims walking to Santiago de Compostella.