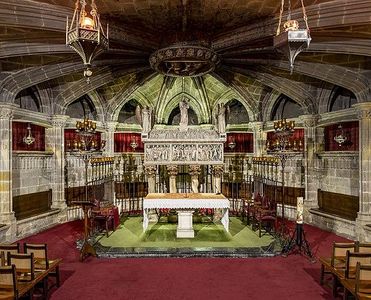 The Cathedral of the Holy Cross and Saint Eulalia , also known as Barcelona Cathedral, is the Gothic cathedral and seat of the Archbishop of Barcelona, Catalonia, Spain. The cathedral was constructed from the thirteenth to fifteenth centuries, with the principal work done in the fourteenth century. The cloister, which encloses the Well of the Geese was completed in 1448. In the late nineteenth century, the neo-Gothic façade was constructed over the nondescript exterior that was common to Catalan churches. The roof is notable for its gargoyles, featuring a wide range of animals, both domestic and mythical.

It is a pseudo-basilica, vaulted over five aisles, the outer two divided into chapels. The transept is truncated. The east end is a chevet of nine radiating chapels connected by an ambulatory. The high altar is raised, allowing a clear view into the crypt.